The open-source DuckDB system was launched in 2019 by researchers Hannes Mühleisen and Mark Raasveldt from the Database Architectures research group of CWI, the Dutch national research institute for mathematics and computer science. They had spent two years designing and implementing an innovative lightweight database system that manages and analyzes large amounts of data in a highly efficient way. They used state-of-the-art techniques including CWI inventions such as vectorized query processing, but also introduced a number of new techniques. DuckDB is easy to install, and is designed to work embedded within running processes – no separate server is needed, which was found to be a critical for systems that data scientists would use. This new concept of ‘embedded analytics’ opens opportunities for adoption in many markets and future use cases, for instance mobile apps or even intelligent (self-driving) cars.

Since its launch, DuckDB has gained widespread adoption from data scientists and tech companies alike for its ability to run efficiently anywhere, even inside a web browser. By summer 2021, the CWI spin-off company DuckDB Labs was created, now located near CWI in the Amsterdam Science Park, still led by Mühleisen and Raasveldt. DuckDB popularity keeps growing rapidly, with more than 800K downloads this month, a growth of more than 3x in the past year.

Early 2022, DuckDB got the attention of Jordan Tigani, who realized that the vast majority of data analysis workloads are not huge and can be run on local computers, even laptops. But the industry keeps focusing on large-scale distributed database solutions in the cloud, ignoring the needs of most data analysts. Tigani believes ‘the simplicity and the ease of making sense of your data is a lot more important than size’. With that, he imagined a cloud service on top of DuckDB that helps users, who originally work off their own laptop, to manage increasing data sizes as well as workloads that become more complex as datasets get shared in a team. “We’re building a serverless data analytics platform that grows with you, without the complexities of distributed computation. You can scale up and scale down with ease as your needs change”, MotherDuck states on its website.

MotherDuck has assembled a stellar founders team: besides Tigani it includes industry veterans who in the past designed the storage infrastructure for Facebook and the cloud service for Elastic Search. The main MotherDuck team is located in the US, but it already has an Amsterdam presence as well. This experience and reputation of its team makes MotherDuck well-positioned to develop its technology, but also helps attract further talent as well as capital. 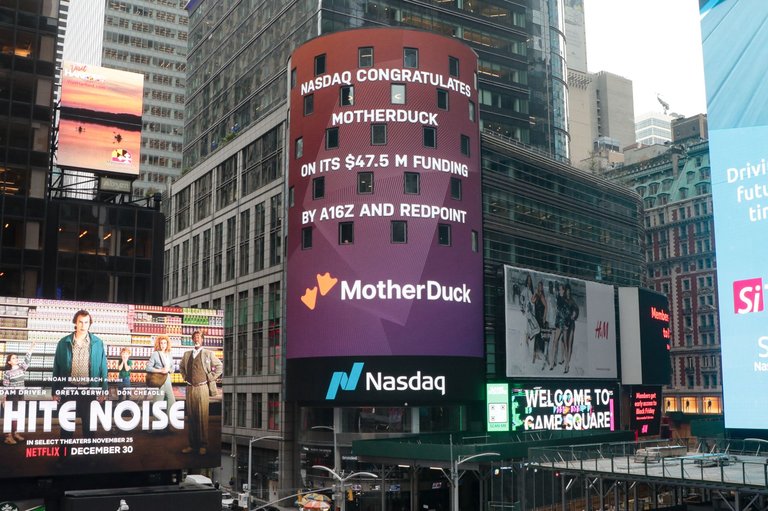 DuckDB Labs from its inception has received many investment offers from venture capitalists, but eventually decided not to take venture capital, and rather opted for a business model where it works with a few important partners. “We look forward to the continued growth and adoption that partnering with MotherDuck will bring. Thanks to the MotherDuck team, we are able to focus our efforts on independent innovation of the DuckDB core platform and growth of the open-source community.” says Mühleisen, who currently combines a tenured research position at CWI with the role of CEO at DuckDB Labs.

Behind this decision is an incubation strategy that is new even in Silicon Valley: “Our idea is to keep DuckDB Labs small and artisanal, but incubate a separate company where venture capitalists can invest in and that will quickly grow”, explains Mühleisen. This idea was suggested by CWI colleague prof. Peter Boncz, for whom DuckDB is his fifth spin-off adventure: “Previous experiences have led to this. Open-source MonetDB never monetized well, and VectorWise was sold with intellectual property and all and we lost control over it. With DuckDB we prefer to stay in control, address eventually a broad set of use cases rather than a single market, yet also reap the benefits of venture-driven growth while keeping the software in open-source in the long term”, he explains. With Mühleisen and Raasveldt, Boncz serves on the governing board of the DuckDB Foundation, where the core intellectual property of DuckDB has been placed. The new partner MotherDuck is now also one of DuckDB's gold member supporters.

The establishment of DuckDB Labs and now MotherDuck fit the long-term agenda of the Database Architectures group of CWI to create a data systems R&D ecosystem in The Netherlands.