The new version of ASTRA, co-developed at CWI, offers improvements in compatibility and interoperability with other toolboxes.

ASTRA 2.0 – A toolbox widely used for tomographic reconstruction, co-developed at CWI, now boasts it’s second version release! This new version offers substantial improvements in compatibility and interoperability with other (Python) toolboxes like PyTorch. Amongst others, this enables novel data-driven methods for tomographic imaging.

The ASTRA Toolbox is a MATLAB and Python platform providing scalable, high-performance GPU primitives for 2D and 3D tomography, including building blocks for advanced reconstruction algorithms. One of its main design goals is geometric flexibility, allowing the toolbox to be used with many types of experimental setups. The ASTRA Toolbox has been developed jointly by the Computational Imaging group of CWI, and the University of Antwerp. It is used in tomographic imaging research by academics working on novel algorithms and in experimental imaging labs. It is also deployed by several industrial partners as the core of the reconstruction software in their imaging equipment and applications. Furthermore, the toolbox is a main component in a number of other applications, including software used at two of the largest synchrotrons in the world: the European Synchrotron Radiation Facility (ESRF) in Grenoble, and the Advanced Photon Source (APS) in Chicago. 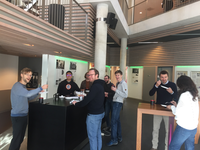