Researcher Floor Sietsma of Centrum Wiskunde & Informatica (CWI) in Amsterdam is the youngest PhD in the recent academic history of the Netherlands. 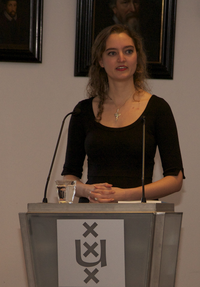 Researcher Floor Sietsma of Centrum Wiskunde & Informatica (CWI) in Amsterdam is the youngest PhD in the recent academic history of the Netherlands. Recently elected 'Nerd of the Year' by readers of the magazine Quest, she was 20 years old when she defended her thesis 'Logics of Communication and Knowledge' on 13 December 2012 at the University of Amsterdam (UvA).

Sietsma's research concerns knowledge transfer in communication and makes use of the epistemic logic, a logic of knowledge. She applies this, among others, to analyze shared knowledge in complex e-mail exchanges with visible (cc) and hidden (bcc) receivers. She also develops a complete logic of manipulative communication, for instance in a game of Liar's Dice, where players mutually agree to lie and deceive.

Sietsma started her PhD research at CWI in early 2010 at age 17. She already held a Bachelor's degree in computer science and a Master's degree in logic, and was at the age of 12 the youngest student ever at a Dutch university. For her research at CWI she was awarded a special, personal grant by the Netherlands Organisation for Scientific Research (NWO) because of her unique talents. Now, 2.5 years later, she already has gathered enough material to be able to defend her thesis.

The next 1.5 years, Sietsma will remain attached to CWI as researcher. She has also started a Bachelor in Pedagogy to be able to help gifted children as educationist. 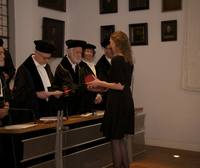