A PhD fellowship for talented female students in science. 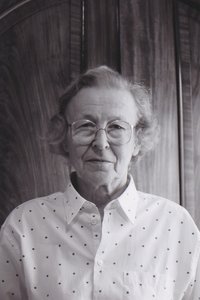 In honour of Constance van Eeden

To stimulate the recruitment of female PhD candidates, CWI launched the Constance van Eeden PhD Fellowship in 2022. From this year on the fellowship offers one PhD position to a talented young female student in mathematics or computer science or a related field of science. It is put in place in honour of and named after Constance van Eeden (1927-2021), who worked at CWI from 1954 to 1960 and was one of the first female PhD students in statistics in the Netherlands.

CWI believes that in order to increase the number of women in science, there should be more female role models. Constance van Eeden was such a role model. While raising her daughter Kari, she became the first Dutch woman to complete  a PhD in statistics. In this respect, she was a real trailblazer. It would be almost 30 years before other Dutch women in mathematics would follow in her footsteps.

We all had the right to the same chance in life

Constance van Eeden: I had two parents who just were absolutely convinced that we all had the right to the same chance in life. On the other hand, after I got my Ph.D. in 1958 it took 29 years until the next Dutch woman got a Ph.D. in statistics. I asked a Dutch colleague once why this was. 'Don't you encourage the ones that show promise?' I asked. He said:`Well, if they want a Ph.D. they can come to me.' And then three or four years later two Dutch women got Ph.D.-s in statistics. It was really maybe a matter of discouragement from parents and from teachers. The ways were open, but the women students were discouraged either at home or at school. And also there was a lack of role models.

Constance van Eeden, a role model for women in science

What does the Constance van Eeden PhD Fellowship offer?

Watch the video above for the experiences of three female researchers at CWI. Please note: the application procedure for 2022 has been closed. As of 1 December 2022, Hilde Verbeek started her PhD as our 1st Constance van Eeden PhD fellow in CWI's Networks & Optimization group.