CWI researchers Peter Bosman and Hoang Luong, along with colleagues from Amsterdam UMC, have been awarded the Humies Silver award at the GECCO 2019 conference, for their efforts in the automated generation of treatment plans for prostate cancer using brachytherapy.

CWI researchers Peter Bosman and Hoang Luong, along with colleagues from Amsterdam UMC, have been awarded the Humies Silver award. The prize was awarded at the Genetic and Evolutionary Computation Conference (GECCO 2019), for their efforts in the automated generation of treatment plans for prostate cancer using brachytherapy.

The award-winning work demonstrated that physicians largely prefer automatically generated treatment plans above plans that were created with current methods, which involve a lot of time-consuming manual work. In 98 per cent of all examined cases, automatically generated treatment plans were favored by physicians that took part in this blinded study. Moreover, the physicians very much appreciated the fact that the developed algorithm provided not just a single treatment plan, but a whole range of them. This would allow physicians to gain much more insights in the scope of treatment options for each specific patient, and eventually select the best possible treatment.

The Humies awards recognize work that aims to solve problems via techniques from the field of evolutionary computation, but also produces a solution that is demonstrably human-competitive. The prize is considered very prestigious, and the Silver prize comes with an award of $3,000.

Furthermore, at the GECCO conference Bosman’s PhD student on the same project, Stef Maree, won the Competition on Niching Methods for Multimodal Optimization. Maree’s work was considered the top entrant for designing evolutionary algorithms that manage to find multiple optima for specific problems.

The team that won the Humies Award:

Full picture caption of the main picture above this text:
Peter Bosman (CWI), Tanja Alderliesten (Amsterdam UMC) and Stef Maree (Amsterdam UMC) during the Award Ceremony at GECCO, where they received the award for winning the Competition on Niching Methods for Multimodal Optimization (depicted in this photo) as well as, on behalf of a larger CWI - Amsterdam UMC team, the Humies Silver Award. From left to right: Tanja Alderliesten, Stef Maree, Peter Bosman and GECCO 2019 Competitions Chair Markus Wagner (Univ. of Adelaide). Picture: Petr Pošík, Czech Technical University. 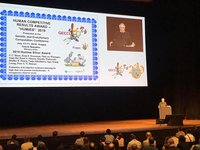