On Saturday, November 17 at 2.28 pm it is exactly thirty years ago since the Netherlands was the first country in Europe to be connected to the Internet.

On Saturday, 17 November at 2.28 pm it is exactly thirty years ago since the Netherlands was the first country in Europe to be connected to the Internet. System Administrator Piet Beertema of Centrum Wiskunde & Informatica (CWI) in Amsterdam received the confirmation that  CWI - as the first institute outside the US - officially gained access to NSFnet, an academic computer network that later evolved into the worldwide Internet. CWI reflects on this anniversary with the publication of a mini-documentary about this historic event. In this film, two of the people involved -Teus Hagen and Steven Pemberton- share their memories and talk about how they look back at that period.

In 1988, the pioneers of CWI gained access tot the  - then still American - Internet  after years of preparation (CWI was already the central hub within the European network 'EUnet' and predecessor NLnet), thanks to their good contacts in the network world. Teus Hagen, head of IT at CWI at that time, explains in the documentary that during the development period, especially hard work was being done to establish the internet connection and the associated technology, so that communication between - especially scientists - would be faster and easier. "Data and information were exchanged freely at that time. If we had known that privacy and hacking would play such a big role in the future, we would have opted for a different approach for sure."

Steven Pemberton was one of the first Internet users in Europe. In a later stage he developed important standards for the World Wide Web, one of the most important applications of the Internet. "In retrospect, establishing that first connection was a historic moment, something we did not realize at that time."

Other academic and research institutions in the Netherlands and the rest of Europe were connected shortly after CWI. SURFnet also played an important role in the Netherlands. Commercial companies only followed later and private individuals had to wait until 1993. CWI became an important network hub between Europe and the US.

A part of the European internet traffic still runs through Amsterdam Science Park, where the CWI is still located. This traffic runs via the Amsterdam Internet Exchange (AMS-IX). For his work Beertema in 1999 received the first royal honor ever awarded to an internet pioneer: Knight in the Order of the Dutch Lion. Teus Hagen was included in the Internet Hall of Fame in 2013, as were former CWI’s Jaap Akkershuis (2017) and Daniel Karrenberg (2012).

Illustration 1: The e-mail about the first open transatlantic Internet connection between CWI and the United States . Source: Piet Beertema. 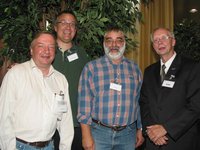