Researchers of the University of Oxford, CWI and other organizations published a paper in Nature reviewing the use of artificial intelligence and machine learning for understanding 'extreme physics' – the physics of matter at extremely high temperatures and densities.

Researchers of the University of Oxford, CWI and other organizations published a paper reviewing the use of artificial intelligence and machine learning for understanding 'extreme physics' – the physics of matter at extremely high temperatures and densities. This area of physics is crucial for our understanding of astrophysics, nuclear fusion, and many areas of fundamental physics. 'The data-driven future of high-energy-density physics', is published in Nature on 19 May 2021, and describes successes to date of the use of artificial intelligence in this field, as well as looking forwards to what might be possible in the future. 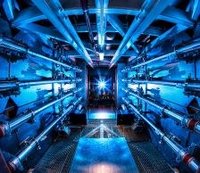 Carl Shneider, a postdoctoral researcher in the Multiscale Dynamics Group at CWI at the time of the meeting from which this Nature publication resulted, says: "It is awesome to be part of this perspective that arose from discussions among astrophysicists, plasma physicists, and particle physicists at the Lorentz Centre Workshop in the Netherlands in January 2020, where I contributed to the discussion on machine learning in space weather".

'Extreme physics' conditions typically produce highly nonlinear plasmas, in which several phenomena that can normally be treated independently of one another become strongly coupled. These nonlinearities and strong couplings makes them very difficult to understand theoretically or to optimise experimentally – a fundamental challenge in the field.

In their paper, the researchers argue that machine learning models and data-driven methods are in the process of reshaping our exploration of these extreme systems. From a fundamental perspective, our understanding can be improved by the way in which machine learning models can rapidly discover complex interactions in large datasets. From a practical point of view, the newest generation of extreme physics facilities can perform experiments multiple times a second (as opposed to approximately daily), thus moving away from human-based control towards automatic control based on real-time interpretation of diagnostic data and updates of the physics model.

The paper discusses three main case studies. Firstly, combining data from both laboratory astrophysics (high-powered laser experiments that can create conditions similar to inside stars on Earth) with data from astronomical observations in a consistent statistical model. Secondly, inertial confinement fusion – training algorithms to understand our current understanding of the physics, but to be able to 'update' their beliefs when they see the data from new experiments, and suggest new designs. Finally, the application of AI to high repetition rate lasers, where an algorithm is control of the laser and chooses what experiment to do to extract the most information from the experimental setup.

The group identifies a number of recommendations for the field to best make the use of the vast amounts of data that are soon to be produced:

The paper was led by Dr. Peter Hatfield, Hintze Fellow in the Department of Physics of the University of Oxford, in collaboration with Dr. Jim Gaffney and Dr. Gemma Anderson at Lawrence Livermore National Laboratory in California. Former CWI researcher Carl Shneider was one of the co-authors.

The paper resulted from a meeting, 'Extreme Physics, Extreme Data', at the Lorentz Centre in Leiden, the Netherlands, from 13-17 January 2020, and was supported by the Dutch Research Council (NWO), the University of Leiden and John Fell Oxford University Press (OUP) Research Fund.